A Few of my Favorite Things

I haven't blogged in awhile, so I thought I'd touch a bit on a few different topics this month... here we go!

Plywood - a New Idea in Flooring

I love the recent trend toward plywood flooring. They are an inexpensive option and yet can have a beautiful grain to them. I was recently in Anna Maria Island and there were plywood floors in the coffee shop that I frequented. Theirs were stained dark green, but I really liked them. I love the natural plywood ones with coats of polyurethane  - it makes the grain really pop. There are all different types of plywood and different hardwoods used to make the plywood.  Cost, of course, varies a great deal depending on the type of floor you choose.

Here are a few options I've seen online - I found other ideas for plywood flooring on Houzz too - check it out here.


CFLs, Dangers of Mercury - and Switching to LEDs

I like to do the right thing environmentally, but  I absolutely hate the light given off by CFLs. Not to mention, I'm sure people throw them in the garbage - which is a no-no because it adds mercury to the environment. I can only imagine how many CFLs are sold by IKEA every year that are later thrown in the garbage.

Why all the fuss? Well, I did some research and this is what if found: CFLs contain about 5 milligrams of a neurotoxin called mercury. An EPA-funded study found that one gram of mercury deposited in a 20 acre lake is enough to contaminate the fish and make them unfit to eat. The reason mercury is so dangerous to humans, wildlife and the environment is that mercury is toxic in many forms and can easily transfer from air to soil and to water. The recycling industry estimates that in 2007 about 400 million CFLs were purchased in the USA but only 2% were recycled. That's 320 million CFLs in the trash.

So recently, I ordered the new Switch LED 100 watt bulb to try. It is a first that it comes in a 100 watt.  It is very pricey now and I will definitely only be buying one for now, but like all new technology, the price will eventually go down. At the current price it will take me at least 6 months for payback but hey, it's for science and the environment!

The 75-watt Switch bulb is dimmable, can be used in a recessed fixture or in an enclosed fixture, in damp locations and lasts 25,000 hours. It looks most like an Edison bulb and could even be used without a shade.


Designing a Dream Closet - Storage Solutions for You, too!


I recently helped a client repurpose a spare bedroom into her dream closet - what a fun project! The nearly 100-year-old home still boasted the original 10-inch baseboards, which we freshened with creamy white paint and used new molding to match pieces damaged over the years. 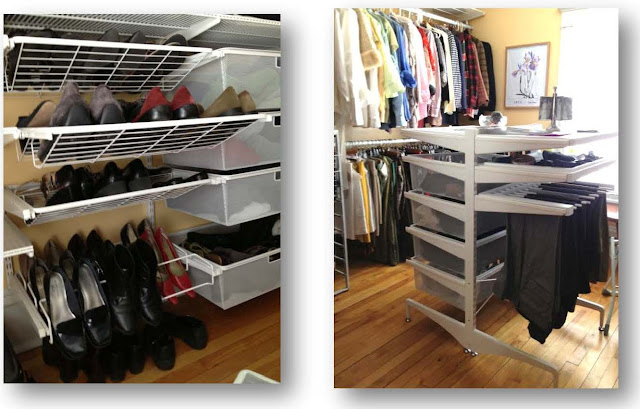 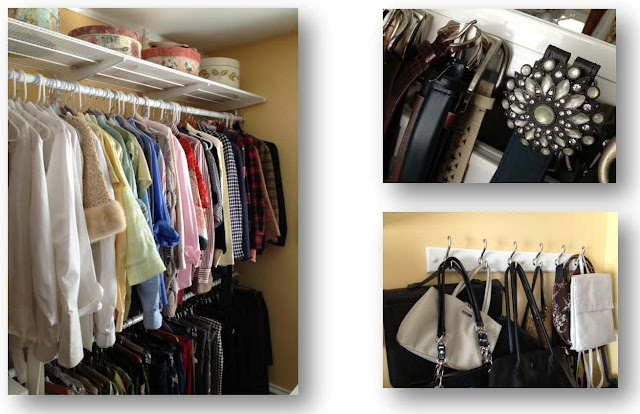 The walls are painted sunny yellow and a large window brings in plenty of natural light. We installed shelving to house stacks of sweaters, plenty of hanger rods for shirts, blouses and jackets, and shoe rack to keep her favorite kicks within reach.
Posted by Celadon Designs at 10:09 AM No comments: