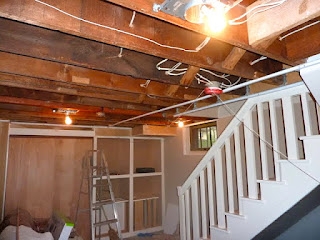 My original cost saving solution for the basement ceiling was to spray paint the joists dark grey so they would “disappear”. I have also seen basement ceilings that were spray painted white. But when I looked at all the electrical wires running through and all the valves for our in-floor heat on the main floor I decided it was necessary to cover the joists with ceiling material.

There are not many options really—either drywall the ceiling or use a suspended ceiling or a combination the two. I felt it was important to have access to those valves, gas shutoffs and miscellaneous wiring, so a suspended ceiling seemed like the logical choice. But given that my ceiling height was only 83 inches high I was reluctant to drop it another 6 inches or more with a traditional suspended ceiling. Plus, I’ve never particularly liked the look of those ceilings. The main room in the basement actually had one when we moved into the house. I immediately removed it because it was damaged and dirty and seemed to close in the space. (Ha! You are probably wondering why I bothered, given how horrible the rest of the room looked! But in my mind it was a quick improvement.)

While researching ceiling products I concluded that a direct mount ceiling offered the best solution for my basement. I wouldn’t lose valuable ceiling height and the panels would still be on a “grid”, making them removable if necessary. Plus, the video made it look so simple. For the grid I decided to use Ceiling Link, a PVC plastic material that is Class A fire-rated. When combined with the panel I only lost 1inch of ceiling height. Yay!

In their defense, ceiling panels today are better than the old versions. They can be made of rigid vinyl or recycled material, making them lighter than the traditional. Both can be Greenguard certified. Many are Class A fire rated. 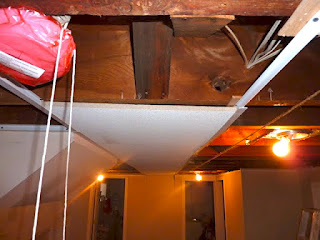 There are a lot of panel options. Most are now 2’x2’ or 2’x4’ instead of the old 1’x1’. This saves installation labor and provides a more uniform, less “busy” look. I chose the 2’x2’ Armstrong Sahara 273 panel which looks like an updated suspended ceiling panel. It has a fine texture and doesn’t look like the old panels with the holes in them. They are a commercial weight. The deciding factor though was that they provide a 50% sound reduction, something we really need because right now you can stand in the basement and hear people whispering above in the foyer. Without a sound barrier the 42-inch TV we are installing in the basement would become a major nuisance for anyone on the main floor. The panels are available through Lowes, but there is a four-week wait for special orders.


So, finally it was time to tackle the ceiling. The walls were painted, the Armstrong panels were delivered and sitting in the basement and I couldn’t put it off any longer. “It should be easy!” I’ve said that many times only to realize it was a lie!

My friend Mark came over to snap some plumb lines across the ceiling and to get  started.


Mark carefully laid out the ceiling and then began to hang the first row. Although he is 6’3”, nearly the height of the ceiling, it didn’t make installation any easier for him. Constantly looking up and working over your head is difficult. Because the joists rolled along every which way it was impossible to hang the tiles directly onto the joists and make them level. A notorious perfectionist, it wasn’t long before he became totally frustrated.


I rented a rotary laser level and he used that to try to level down the rows. It did not work like he hoped since the joists dip in places and blocked the laser’s beam. Since Mark is a good friend who has already spent many hours working for nothing on the basement, I finally told him to go away and forget the ceiling project. Who needs that stress?


I used the level to mark a level ceiling line around the room, beginning with the lowest point of the ceiling, which was the stairwell. It determined the permanent height.

The plumb line grazed the top of one doorway but was 1.5 inches above another. It crossed in front of one of the windows and was above another window. Obviously perfection has no place in an old basement!


It took at least four solid days of shimming and measuring to finish. Getting the track up was miserable enough. Cutting the tiles with a blade and then sliding them into the tracks while tiny, sharp particles from the panel fell into my eyes was another kind of miserable.

As is true in all kitchen and bath design, every 1/8 inch made a difference as to whether the tile would slip into place or the cross piece would sit on the track. I had to move down several recessed lighting cans at points where the ceiling was shimmed down 2 inches from the joists. It was a thwarted process at every step.

It did not turn out perfectly but I have to admit, I am thrilled with the result. However, I would NEVER do it again. It was by far the hardest work I did in the basement — or at least it ranks right up there with the horrible asbestos removal!

A direct mount ceiling is a good choice for new basements with level joists, but older basements like mine are still waiting for a more satisfactory system.


Posted by Celadon Designs at 2:47 PM No comments: