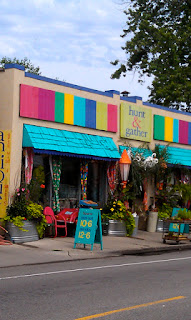 Because I like to shop for antiques and other “finds” that speak to me I often accumulate most of the furnishings before I even begin to remodel or redecorate my own spaces! Twenty-five years ago I knew that we would someday have a cabin. I pretty much had it furnished before we even bought one: blankets to use as curtains, bronze elk candlesticks, rugs, framed fish prints, book cases, and even some vintage lighting. (Didn’t I admit earlier that I was a pack rat?)

Sometimes clients show me an inspiration piece—a piece of art, fabric or furniture-- that they want to include in their new spaces. I am the same way. It is fun to use that piece to set the theme for the space or use it to point the way toward a color palette for the whole project.

I was shopping recently at Hunt and Gather in Southwest Minneapolis (a favorite place for finds) and bought this inexpensive side table that is perfect for the new basement room. It actually began my obsession with Moroccan shapes and all things Moorish.

Then I remembered a picture from Elle Decor magazine that I had been drawn to earlier and saved: It’s a lattice screen in a New York apartment that was also Moroccan inspired.

Luckily this Moroccan influence can be found everywhere at all price points, both new and used and other ethnic and organic pieces work together well with it.  These three things, the green lattice-work, the side table and the rust-brown leather couch that is actually the whole reason d’être for the basement project, inspired the dominant colors I wanted to use in the basement project.

One of my secret mom-reasons behind the current basement project is to have a desirable space where my adult children can stay during Thanksgiving or Christmas. Last year my son, Max lucked out by scoring the guest room while my daughter had to make do with an air mattress in the dining room, an unlucky accommodation that also includes a dog and a cat to walk on top of you and lick your face.
Our last house had an ancient wall bed stored behind a large double-door closet in the library. Metal springs with a mattress were attached to one of the doors that pivoted. The house was built for a judge. Neighborhood lore had it that the judge died in that bed, which of course creeped out the kids in the neighborhood. That aside, the concept of a wall bed has always made sense to me, so I was really excited when I found one a while ago at a local consignment shop. It had never been used, it was a top-of-the-line product, and the price was a real bargain.

I didn’t discover any drawbacks to the deal until we tried to move it. It was incredibly heavy. Taking it apart without ruining the side furniture pieces was impossible—and it still did not make it light enough for me, my husband and my son to move it. So we did have the unexpected expense of hiring professional movers. And it was almost too heavy for those two brawny men, but they managed it somehow.

In general, I have discovered over the years that it is best to avoid buying furniture made of particle board with laminate because often it doesn’t last, much of it off-gasses VOCs (volatile organic compounds) which are thought to contribute to poor indoor air quality cause some short term and possibly long term health effects and, most importantly, is VERY heavy and not fun to move around. So buyer beware! However, I have seen some pretty cool Murphy bed set ups, and have even posted about them on the Celadon Facebook page, so I just couldn’t pass up this bed. 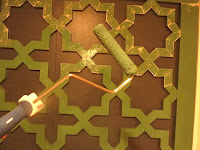 I enlisted the help of a friend, Charles Pederson of Saga Woodworking and Construction, to make a new “face” for the bed. I showed him the picture of the Moroccan screen and asked if he could recreate the lattice-work. He was quite excited with the idea, and intrigued by the challenge.

This Moorish design is composed of two overlapping squares on the diagonal making an eight-sided star. A second repeated pattern is created when these stars are connected to each other. Assembling each star was tedious—16 mitered pieces separately nailed in—but the finished product is beautiful.  (Don’t call Charles because you want this too. I don’t think he ever wants to make one of these again!)

For most of us the design inspiration is the fun part. The actual building isn’t always. It can be messy and frustrating, but nonetheless wonderful to watch the progress and see things take shape.  Next post:  pictures of that progress!

Posted by Celadon Designs at 12:08 PM No comments: